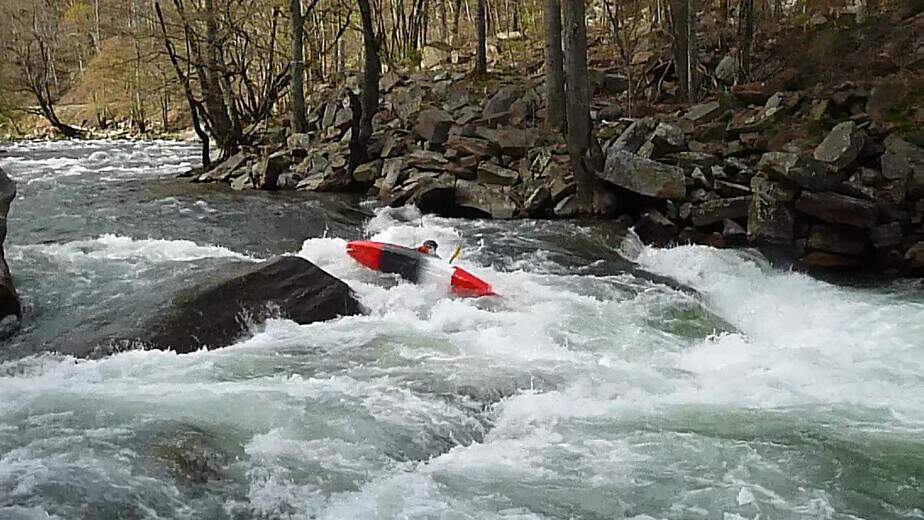 That’s no surprise to anyone I’ve ever paddled with.  My paddling mantra is Don’t tip over. If you do, roll up. Just. Don’t. Swim.  That commitment has served me well, with only two unintentional swims since the Reagan administration.

The most recent swim happened on our 2019 Southern Rivers trip to Nantahala Falls on the Nantahala River. The “event” occurred on my 4th run of the falls during that week; in fact  I had run my own boat down uneventfully only minutes before. There was a group member who chose not to run the falls that day, so I offered to paddle their boat down for them so we could all finish the river together (the takeout is just a couple hundred yards past the falls).  Last year, I paddled the same boat through, taking the diagonal line (starting river left and ferrying river right above the ledge hole) without incident.

The plan for this descent was for our pod to take the “race line,” which is a straight shot right of center, skirting the seam between the middle hole on the left and the big slab rock on the right.

I walked upstream to where the kayak was and slid into the cockpit.  The boat mostly fit but if I thought I was going to paddle it more than 5 minutes, I would have made some adjustments to the outfitting. In retrospect, it would have been better to take the time to move the foot board closer, snug up on the backband and make sure the thigh braces provided better connectivity. The participant’s paddle had a slightly different feather than my own stick and was also a smaller shaft. None of these things alone would have contributed to the swim, but when put together, they became a significant factor.

Top of the drop

Our team of three eddied out river right above the drop.  I ran first and felt like I hit my intended line entering the drop.  The boat hit the seam between the hole and rock and got tilted left. I took a compensating stroke on the left but it hit the foam pile of the hole and felt like there was almost no purchase on the blade.  This could have been caused by the aeration of the foam pile or the blade angle being off, and as a result, I sliced through the pile without any support on the blade. On the video, the time between initiating the stroke and being upside down is only one second.

Not my first time underwater here

A few years ago I capsized in the hole at the bottom and was a little surprised at how difficult it was getting the paddle to the set up position due to the turbulence underwater. I made the decision this time to just set up and hold on until it felt like the boat had been swept past the most turbulent water. It lasted longer than I expected.  Sometime between the initial capsize and the first roll attempt, I took a major rock shot to the helmet, definitely the hardest hit I’ve experienced. I don’t think that affected the roll but it certainly didn’t help.

Both roll attempts suffered the same issue.  The boat never rotated over sufficiently. It felt like my knee was sliding off of the thigh brace.  The ergonomics of the pre-2019 Pyranha Fusion has a fairly straight legged sitting position. Both the sea kayak (P&H Aries155) and the whitewater kayak (Pyranha Burn) I paddle have a fairly wide knee position that translates to great edge-to-edge control.  The more straight leg position makes paddling forward more efficient but is slightly more challenging when edging. (note the 2019 Fusions have been redesigned and feature the wider leg position)

Normally, I’m good for three roll attempts.  I figure if the first roll fails, it might have been environmental, but if the second fails, it’s probably me.  The third roll Hail Mary is usually a layback that (almost) always works. The video shows roll attempt 1 with my body slightly in the back seat.  If you want to roll with a C-to-C or sweep roll, being a little in the back seat is not helpful. If you want to layback roll, the closer to the back deck you can be, the easier it is to roll.  My body position on both attempts was not optimal for either version.

There is some part of our ancestral reptilian brain that becomes more insistent the longer we are under water.  The “conversation” goes something like this:

Conscious Brain: “We just need to hang out underwater for a few seconds as we move through the turbulent water.”

Conscious Brain: ” Just a little longer and then we can roll up.”

Reptilian Brain: “You’re killing us, get us to the air!”

Reptilian Brain: “That’s it, I’m done asking.  Get your head in the air NOW!” (takes over motor control)

Conscious Brain: “I told you to just wait, I got this, but nooooo, you had to jump in and raise our head now we’re back under water.”

Reptilian Brain: “I don’t understand kayaking. Normally, getting our face in the air as soon as possible is a really good thing.”

Conscious Brain: ” You need to learn about delayed gratification.”

Reptilian Brain:  “I haven’t learned anything new in a million years”

Conscious Brain: ” Is there someone else there I can talk to…?

There were several lessons I learned from “the ordeal”:

The adage “We’re all between swims”  is something that I know to be true but also something that I try very hard to prove false.  Whether frequently or infrequently, swimming is a part of paddling and we do train for that eventuality.  We practice being a swimmer and we practice rescuing boats, paddles, swimmers and whatever other yard sale items that float free.  Here’s to at least another ten years before the next one! 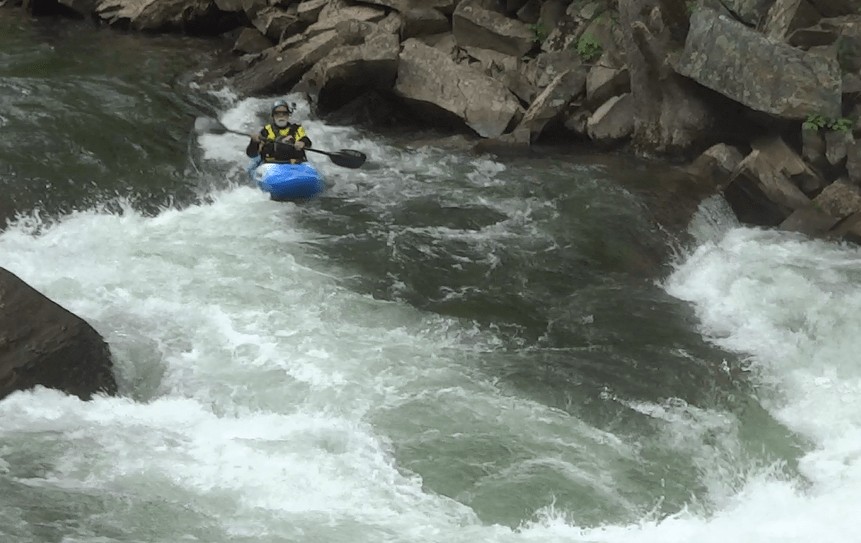